Running a half-marathon in all 50 states

The first half marathon that I ever ran out of state was during Ironman Eagleman 70.3 on June 14, 2015 in Maryland.  That was my worse half marathon experience ever!  Next came the Cayman Islands Half Marathon on December 6, 2015 which was out of the country, so that doesn’t really count now does it.  Next was the Gasparilla Distance Classic in Tampa, Florida, on Febuary 20, 2016.  This was my first real taste of traveling and running road races, and this is what sparked the idea of possibly running a half-marathon in each of the 50 states.

So as of this post I am sitting comfortably at 15 states + DC with 35 states to go.  Seems like a whole lot, but I am in no rush and will see and explore the United States at my leasure.

Next up for me is the Detroit Free Press International Half Marathon this weekend.  This race is super cool because we get to cross the bridge and run 2.5 miles or so in Ontario, Canada, and then back over into Michigan.  This will be my first time stepping foot on Canadian soil so I’m pretty excited about that.  I’m just hoping it is not too cold at the start.  Sundays low temp is 47 degrees, with a high of 66.

This past Sunday I got to run one of my favorite races.  I think its my favorite mainly because its in the Bronx, and I’m from the Bronx!  I think this is my 3rd or 4th Bronx 10 mile.  I try to do it every year, but it always falls on my anniversary weekend.  Luckily this year I didn’t have a trip planned, so the Bronx 10 mile it was!

Looking back on previous years, this years time was really the pits!  Granted I am certainly not as fast as I use to be, so my times have really taken a dive, but I hadn’t realized that it had gotten this bad! Another granted, I really wasn’t attempting to run this race fast, but was instead treating it like another marathon training run.  I did a 3:1 run walk miles 2-9.  Run walking has really helped me to stay healthy, and get through my double digit runs without feeling like death warmed over.  So while I was 16 minutes slower than the last time, I’m happy with this time because I did what I needed to do, and finished in under 2 hrs.

Oh, another goodie about this race is we run by my Alma mater Dewitt Clinton High School.  Every-time I have the opportunity to see my old High School in person, it brings a smile to my face because I had so many good memories there.  Fun fact: Stan Lee, the creator of X-Men, Ralph Lauren, and even Tracy Morgan all graduated from Clinton High School, and so did I! lol.

Of course I had to get a selfie in front of the school!

All in all, still one of my favs, and I hope I can do it again next year.  This weekend I am off to Atlanta to run The Race, it should be a jam packed weekend.  I’ll be documenting the entire weekend on video, and will have my full race report next week. 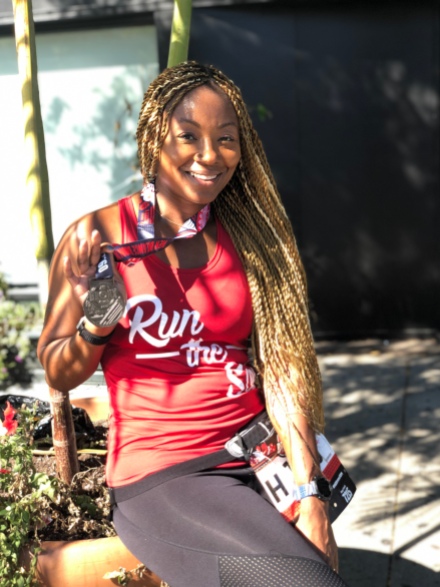 I am fundraising for the London Marathon….click here https://justgiving.com/fundraising/str8kim to support Team Sense and to help me reach my goal!

So this past Saturday I tackled my 5th Brooklyn Half Marathon, and it surely was a doozy!  My day started super early.  When the alarm went off at 3 am I really wanted to say screw it and go back to sleep.  It was just to dang early!  My friends Janis and Allison were volunteering at the finish-line, so I bummed a ride with them down to Coney Island to cut down on my commute time for the day…thx a bunch Janis!

When I hoped out of the car I had to use the bathroom, so  I truck it over to Dunkin Donuts, and of course they didn’t have a public bathroom.  Luckily McDonald’s was right across the street, and they had a big, nice, clean bathroom, and their coffee is waaaay better anyway, so forget you Dunkin!  I used the bathroom, grabbed some coffee, and I was on my way.

I walked over to the train where there were lots of runners getting on.  They more than likely parked in Coney Island, and were taking the train to the start like is was.

Views on the train

Once I reached the Prospect Park area, I ran into a few of my running folks. 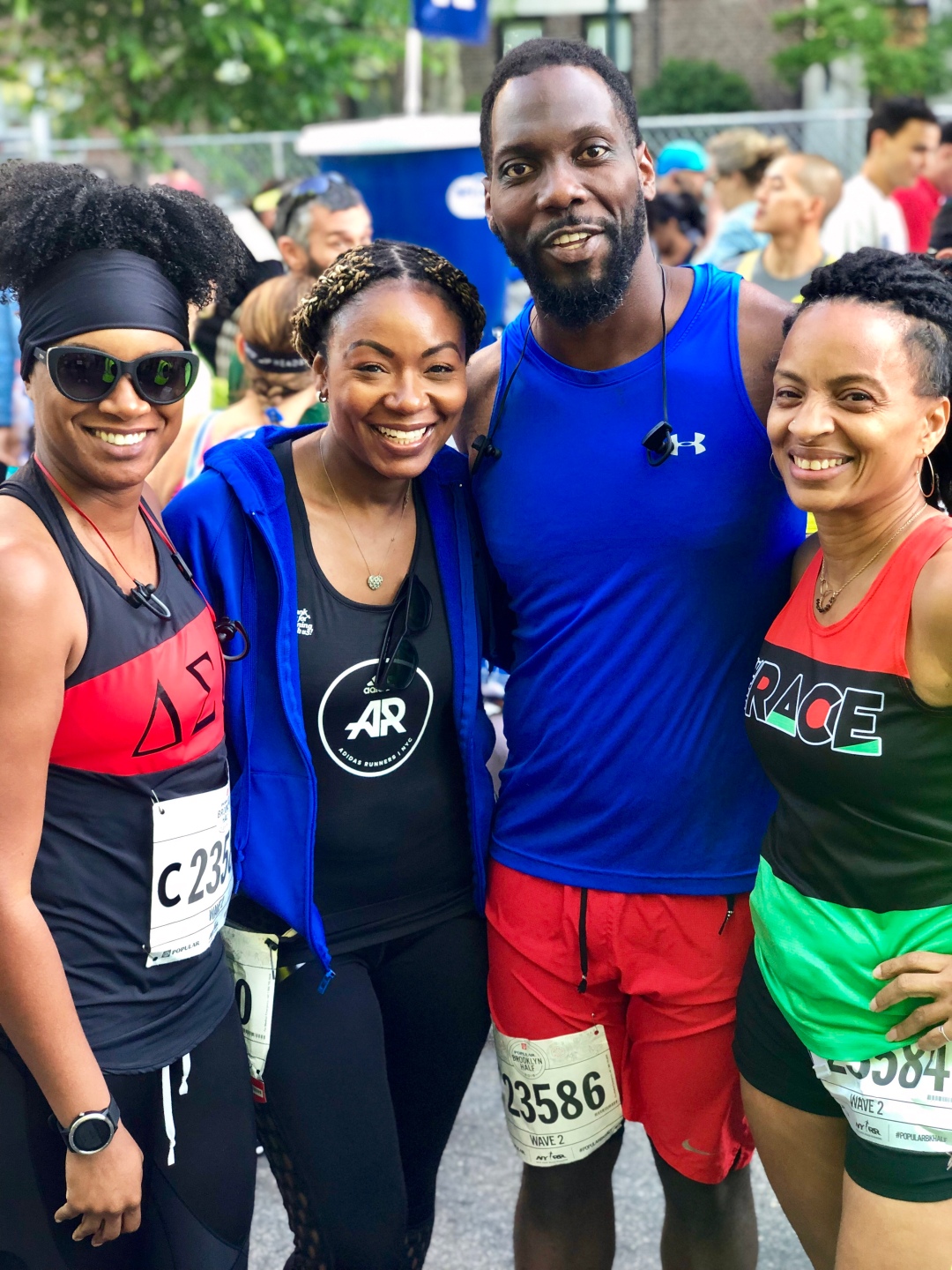 More of the AR Crew

I was running ok coming into the race.  Nothing to write home about but, I had not done any long runs, so I knew I’d be in trouble after mile 6.  Well that trouble came earlier than 6.  By mile 4 my shins were achy, and I knew I’d be commencing my walk/run intervals.

My splits for the race

This pace chart shows when I walked and ran.  All of the severe dips that you see are when I was walking.  I try to keep a steady pace of Run 3 minutes, walk 1 minute.  Sometimes I stick to it, sometimes I don’t.  Most of this race I stuck to it, until I got to the end when I was just really over it all.

As I was coming up on the boardwalk and nearing the finish-line, I was just so happy that it would all be over soon.  I  hadn’t run more than 7 miles in so long, so I was really feeling it.  As you can see I was not smiling at all!  This was my only pro-race pic taken by the photographers, when I know I smiled at that camera plenty of times. (insert mad face)

Once I crossed I ran into my boos who were giving out medals.  Hey girls!

I had a change of clothes with me that I left in Janis car, so I booked it over to her car to change.  Yes I changed in the car!  On my way back I bumped into James (Nighhawk) 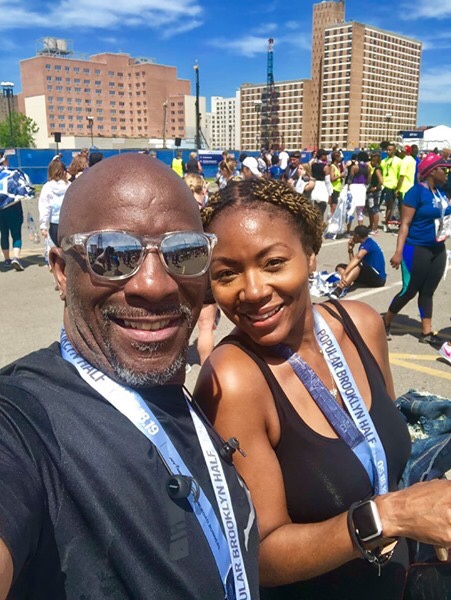 Then I booked it over to the Adidas Runners NYC after party at Margarita Island, and it was awesome!  Here are some pics:

All in all I had a good time at the race.  I said afterwards that I wouldn’t do it again, but hey, ya never know!  I really wish they would change the course though.  The logistics of this race is almost as annoying as the NYC Marathon!  Until next time!

My 5 Brooklyn Half Medals…aren’t they purdy! 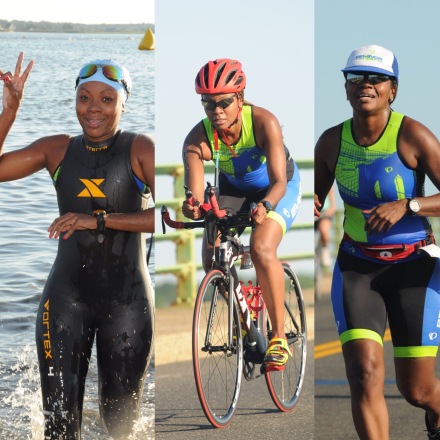 Not really a full recap, but more of a hey I’m still alive!!

This was my first tri of the season. It was a 500m swim, 9.7 mile bike, & 2.9 mile run. My stats were more along the lines of 768m swim, 9.64 mile bike, & 2.85 mile run. Mostly everyone I chatted with over-swam the swim. I don’t know if the swim was not marked correctly, or if we just all swim badly, but to swim 250m additional was a bit of a mess! I felt pretty good on the bike. It was an out and back course. Going out I averaged 15.8mph…I was really riding miss daisy. On the way back I averaged 18.7mph, but was riding 20mph at least half the time. The bike was nice! The run was your basic run, nothing to write home about. Overall I felt pretty good during this race, and it was nice to get back into the game leading up to Ironman AC 70.3 which is nearly a month away! 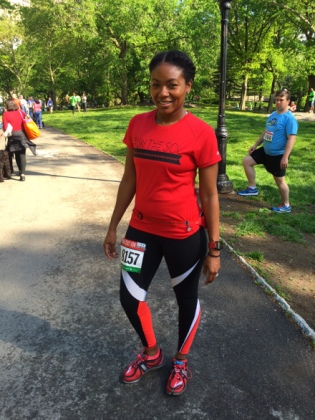 On Saturday I ran the UAE HK 10K in Central Park.  When I was lined up in the corrals I turned to my friend and said I hope this isn’t the Scotland Run route; low and behold it was the Scotland Run route!  This route is what I call the reverse run of Central Park.  It is the absolute worse because you are constantly running up and down (mainly up hill).  So it is very easy to poop yourself out, especially early on during the race.  The race starts off with a steady incline, and as I’m running it I think what the heck is this!  We run through the start, and the finish line is about 400 meters after the start line, so we run through the finish line at the beginning of the race.  When I run this route I always wonder why they just don’t start and finish the race at the same point.  Anywho I was off.

I kept a decent pace the first mile 9:50, and the exact thing that I mentioned above could

happen did happen…I pooped myself out!  As you can see from the elevation chart the start of the race was basically a steady increase in elevation.  A quick downhill, then a steady climb during mile 2.  The climb was really torturous because I remember once I got to the top I had a bit of a break on a straight away, then a decent, then here comes a whole other climb.  It was just really nonstop.  Once I reached the 5K mark I never thought I would see the end of that hill. I was so happy to get to the top and get a slight breather. 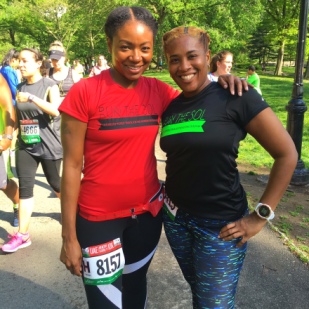 Me and Allison pre-race

On top of the constant climbing, it was unusually hot out for May in NYC.  I was sweating almost immediately once the race started; like sweating so badly I was constantly wiping my forehead.  Because I was so hot I made sure to hit every water station for hydration.  One of the stations had gatorade so I grabbed two cups there, chugged them down, and kept it moving.

The rest of the race was pretty uneventful.  I ran up on a guy and he was stomping so loudly, I tapped his shoulder and he looked at me and I said pick up your feet, we only have a mile to go!  He looked at me with the “what the heck did you say face?”  He takes out his headphones and I repeat myself and he picks up his feet and takes off.  I caught back up to him about 200 meters later and just cruised by him.  I think he was a bit tired at the point, but he was no longer dragging his feet.  If you see a runner doing this…help em out!  I finished the race in 1:06.  My slowest time for a 10k in a long time, but I’m ok with that.  I’m getting back into the groove of things, and I am bound to improve in the very near future.

Next weeks race…The Brooklyn Half!!

Is this lavender or lilac? I don’t know which one it was, but they smelled wonderful!

Me and Allison on the streets of NYC.